An electric motor is an electrical machine that convert […]

In normal motoring mode, most electric motors operate through the interaction between an electric motor's magnetic field and winding currents to generate force within the motor. In certain applications, such as in the transportation industry with traction motors, electric motors can operate in both motoring and generating or braking modes to also produce electrical energy from mechanical energy.

Found in applications as diverse as industrial fans, blowers and pumps, machine tools, household appliances, power tools, and disk drives, electric motors can be powered by direct current (DC) sources, such as from batteries, motor vehicles or rectifiers, or by alternating current (AC) sources, such as from the power grid, inverters or generators. Small motors may be found in electric watches. General-purpose motors with highly standardized dimensions and characteristics provide convenient mechanical power for industrial use. The largest of electric motors are used for ship propulsion, pipeline compression and pumped-storage applications with ratings reaching 100 megawatts. Electric motors may be classified by electric power source type, internal construction, application, type of motion output, and so on. 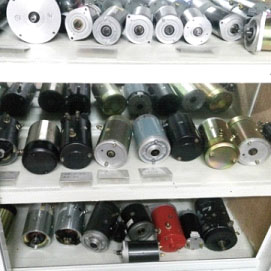 Electric motors are used to produce linear or rotary force (torque), and should be distinguished from devices such as magnetic solenoids and loudspeakers that convert electricity into motion but do not generate usable mechanical powers, which are respectively referred to as actuators and transducers.